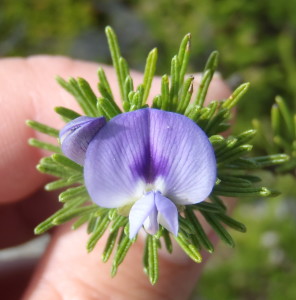 A rare new species of fynbos has been identified in one of Eden to Addo’s Corridors, namely the Robberg Coastal Corridor – a 16km strip of land situated between Robberg and Harkerville in the Cape’s Garden Route.

Speculated to possibly only exist in a few coastal locations in the area this rare and undescribed species of the family Fabaceae – which has been called Psoralea vanberkelae  after Nicky van Berkel – is an exciting find and further entrenches the Robberg Coastal Corridor as home to several uncommon and unique plant species.

South African fynbos largely makes up the tiniest floral kingdom in the world and is found in a rim along the country’s southernmost reaches, never more than 200km from the sea.

South Africa’s conservation of fynbos is critical to the survival of this botanical treasure. Many fynbos species are specialists and some occur only on a few hectares – nowhere else. Encouragingly, 20% of this kingdom is officially conserved, but its sheer diversity means that much remains unprotected.

“The Robberg Coastal Corridor Landowners Association has been campaigning to have the area declared a Protected Environment,” explains Chris von Christierson, Chair of the Association.  “We hope that the discovery of Psoralea vanberkelae will help our cause.”

The discovery of this new fynbos species was confirmed by UK based Professor Charles Stirton who is an Honorary Research Associate from the Botany Department at UCT.  Professor Stirton visited the site specially in order to study the plant and has stated that it has the largest leaf glands in the genus.

“The Robberg Coastal Corridor is an important preserved piece of coastal vegetation and I fully support the campaign to get the area declared a Protected Environment,” said Stirton. 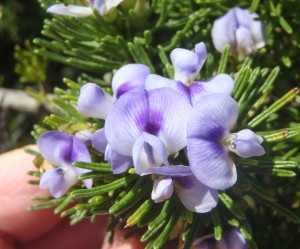