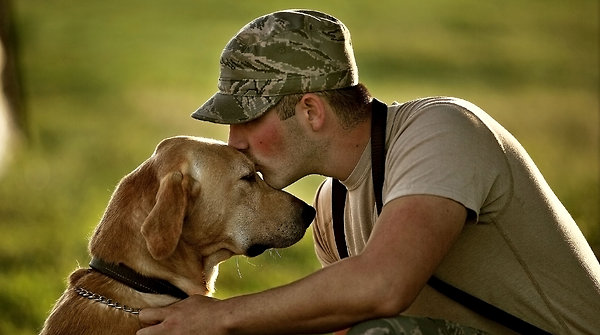 Military dogs are unsung heroes who protect and serve alongside the brave men and women in the armed forces. From going through basic training to serving veterans who are home from combat, these amazing canines do their part without question, with only love and companionship as their reward.

Here are the stories of two amazing military dogs:

In 2004, Mike Morrison fulfilled one of his life’s dreams by enlisting in the army. Then, at the age of 19, he went from basic training directly to Iraq, where he served as a recovery specialist. Unfortunately, Mike developed severe anxiety and post-traumatic stress disorder (PTSD). In 2008, he made his way home after receiving an honorable discharge.

Upon his return, Mike was plagued with nightmares, and he found it nearly impossible to keep a job. But the veteran was able to find joy when he met and married Tiffany, a wonderful, supportive woman who helped him through his darkest days. But Mike still struggled to cope with his everyday life.
Finally, someone suggested a service dog. When the veteran was first presented with the idea of getting a service dog, he was hesitant. “I had always thought service dogs were for the blind and the mobility-impaired,” he says. But after speaking with other veterans who relied on their service animals, Mike quickly warmed to the idea and set out to be paired with a canine companion. Unfortunately, he faced a road block. “I did some research and discovered that the average wait time to get a service dog was 2 t o 5 years,” he explains.

That’s when Mike discovered Mutts with a Mission, a nonprofit organization that trains pairs of veterans and dogs. He soon set out to find the perfect service canine for him. “I’ll never forget the first time I saw Jud,” Mike recalls. “He was a two-year-old lab. He stood beside me and wouldn’t leave.”

It was doggie love at first sight! “By the time we finished our first walk, I remember telling myself ‘this is the dog for me,'” says Mike.

During his first night in his new home, Jud jumped into action by waking Mike up from two different nightmares. That was all it took for the veteran to know that his new canine companion was the perfect support system. The pair finished their training program and passed with flying colors.

Before he met Jud, Mike could barely leave his house and rarely spoke to anyone. But today, with his service dog by his side, Mike has found a new lease on life. In fact, the veteran devotes most of his time to volunteering at Mutts with a Mission. He speaks in front of groups of people and even marches in parades, promoting the program and sharing his story.

Senna, a Mine Detection Dog (MDD)
Senna was born in 2006 in the Netherlands. When she was just a year old, she was selected by the Marshall Legacy Institute (MLI) Children Against Mines Program (CHAMPS) to train as a Mine Detection Dog (MDD), the highest echelon of explosives dog. This program trains dogs to sniff out land mines, creating a safer place for children, families and troops to work and live in war-torn countries.

Senna served the US Air Force in Afghanistan for two years by clearing areas so that airplanes filled with troops and supplies could land safely. The military dog then cleared land for the US Army in Kandahar for two more years. MDD Senna’s final assignment in Afghanistan was to work with the UN for six months.

After more than five years clearing about 1.5 million square meters of land, Senna retired from active duty, becoming the Canine Ambassador to the CHAMPS Team in 2012. The service dog traveled with her handler, Kimberly McCasland, to visit and perform simulated minefield demonstrations at schools, the State Department and the UN, until she died in October 2015.

One of the most important parts of the MDD Training is to teach each dog how to bond to his or her handler. After all, only the handler takes care of the service dog in the field — the pair is together at all times, until the MDD returns to the kennel each night. This special relationship is what keeps them alive while working in dangerous conditions. “The love and the bond between dog and handler is incredibly strong,” says McCasland. “These dogs bless our lives, and then go on to save so many others.”